Some things in life become our favorites but sometimes we don’t really know why. I’ve visited the National Gallery on the first days I’ve moved to London, and the  Bathers at Asnières was love at first sight for me.  Here is one my tweets about it which weirdly enough was posted almost 5 years ago on March 14 (Don’t mind my English) :

Great day! I was staring at Seurat’s Bathers at Asnières at the National gallery for an hour 🙂 This is one the best work of arts of all time

So this is more of an observation list than a review of the painting but bear with me. Georges Seurat died really young at the age of 31 and it’s such a tragic loss because I would love to see his work evolve, his cause of death is uncertain but it was probably along the lines of pneumonia or meningitis or diphtheria. The “Bathers at Asnières” and “A Sunday Afternoon on the Island of La Grande Jatte” are considered his masterpieces and they are related both in technique but also subject-wise. Although the first one is easily accessible to me the second one is at the  Metropolitan Museum of Art in New York a bit out of my reach (for now).

There is a lovely interpretation of these two works, the “Bathers at Asnières” depicts young people having a rest on the bank of the Seine in a working-class part of Paris and the “A Sunday Afternoon on the Island of La Grande Jatte” scene is supposedly just across the river. In  Bathers at Asnières you can see a middle-class couple on a boat, a man with a top hat and a lady with a sun umbrella, now the young boy in the water shouts something to the other side, that something can be “we are the future come and join us”  supporting Seurat’s beliefs that the working class is the future. 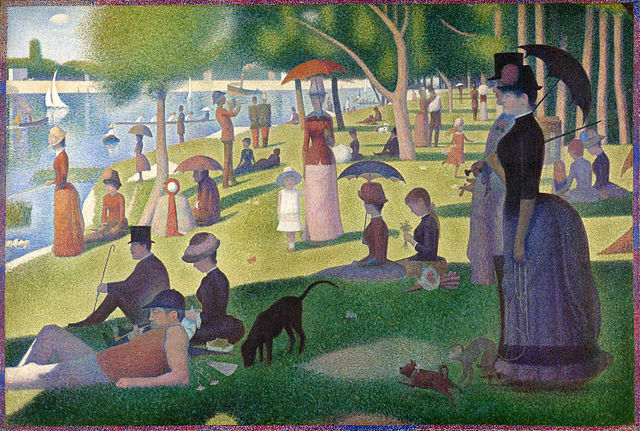 “A Sunday Afternoon on the Island of La Grande Jatte”

Last Sunday I met a lovely girl at the National Gallery but she happened to be 20 minutes late and I happened to be 20 minutes earlier so I decided to go study my favorite painting, had my headphones on  and one song on repeat ( http://youtu.be/f4dZbJHT7_4 ), I seem to do that “repeat one” thing a lot lately. I had an amazing 40 minutes and I also made some observations but also some questions which will never be answered, but who cares really?

First of all, there are 11 people and a cute dog depicted in this painting. There are clear signs of the industrial revolution in the background, probably the factories that our heroes are working in? A giant factory dominates the background and you can clearly see black smoke rising up the air.

In the middle of the painting there is a man, which I am gonna call “shadow face man”, his face (and his magnificent nose) is unclear and there is no obvious reason for that, the direction of the light on the rest of the painting makes the shadow on his face somehow look unnatural.  Is that an error? Was he suppose to be wearing a hat? Is it deliberate? I don’t know the answer but it’s fun if you ask me.

Next, to him there is a woman’s hat (or maybe I am wrong) and a pair of small size shoes, my imagination tells me that he is there with a lady but she is out swimming. Him and the little boy are surrounded by this white kind of aura, which is a successful technique to make them stand out from the background and to become more prominent in the painting. If you notice the whole painting has a photographic like focus that starts normal and then fades out to blurry details in the background. One of the details of the background is the “stare” of the top hat man (click on the paintings’ picture above and you will get a high-resolution image, zoom in I think he is wearing “Matrix” like glasses)

One other thing to notice about the light is that the boy that is shouting in the water should have a shadow big enough to reach the bank but there is no trace of his shadow either on the water or on land.   Next, to the couple in the boat, you can clearly see an athlete, probably part of a rowing crew.

The reflections in the water are the strong point of the painting, together with the colors they can recreate the feelings and the urge you get to jump in to cool waters on a really hot day.

The last thing to notice is that the little shouting boy has something like a spotlight on him, there is a constant fight going on when I am watching the painting, mostly between the Illuminated “shouting boy” and the darker “shadow face man”.

That’s all for now, maybe next time I’ll spend time with my favorite painting there will be updates 😉